Is big-wave surfer, and shark-riding freediver Mark Healey crazy? Or does he know something the rest of us don't?

A little of both, I think, as this video of Healey diving with bull sharks attests. He goes on from the title quote above to say: "People have ulterior motives. I think people are way more dangerous than sharks." Hard to argue with that.

This guy, however, seems more than a little crazy.

END_OF_DOCUMENT_TOKEN_TO_BE_REPLACED

One nice thing about this blogging game is that you sometimes get useful feedback. For example: about two years ago I put up a post about Joshua Slocum and his bizarre homemade 35-foot dory/junk Liberdade, which he sailed from South America to the U.S. in 1888 with his family after they were shipwrecked on the Brazilian coast. This included a brief end note as to the fate of the boat, to the effect that it had been donated to the Smithsonian Institution, but that it wasn’t known whether the Smithsonian still had the boat hidden in its vaults, ...

END_OF_DOCUMENT_TOKEN_TO_BE_REPLACED

James Cameron, a film-maker by profession and an explorer by nature, is going deep. Very deep. Sometime in the coming weeks he'll squeeze into a one-man submersible and dive to the bottom of the Challenger Deep, the deepest known point in the world's oceans. Located in the Mariana Trench, it is almost seven miles down (significantly deeper than Everest is high). It's another world.

Here's Nat Geo on the mission:

Just Tuesday, during testing offPapua New Guinea, Cameron dived deeper than any other human has on a solo mission. Now he aims to become the first 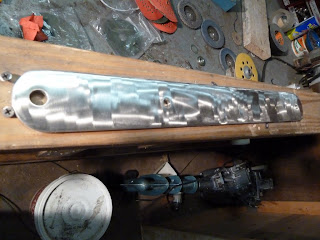 In my last post I talked about the process of choosing the material for making your own chainplates. Today we’ll cover the machining process and then I’ll follow up with my polishing techniques. The material that I ended up using was 2″ wide, 1/4″ thick stainless steel barstock which I had cut into 18″ lengths. It looked like this when I picked it up: 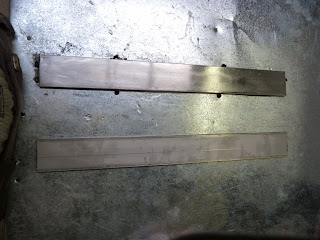 Actually I’ve already done some polishing on the top one, the bottom one is as I received it.
This is hot-rolled 316 stainless steel barstock. Cold finished barstock would have been a better choice ...
END_OF_DOCUMENT_TOKEN_TO_BE_REPLACED

When it comes to welcoming racing yachts that have crossed oceans, no city or port exceeds Auckland for turnout, fanfare, and enthusiasm.

Groupama finished in the dark, but check out the arrival of PUMA:

That's what it looks like when sailing is a national sport.

END_OF_DOCUMENT_TOKEN_TO_BE_REPLACED

All too often we see ships wrecking and dying. So it is very uplifting to see a ship wrecking and–against all odds–being saved. Quite moving, really.

This video is like the video shorts you see in the Oscars (though it wouldn't win any awards for sound mixing). But it is compelling viewing because it tells a dramatic and improbable story. And if you love ships and the sea, you should watch.

So, without further adieu, the curtain goes up….

END_OF_DOCUMENT_TOKEN_TO_BE_REPLACED

10-Mar-2012 puerto vallarta, mexico.
Bathroom shower is finally up and running properly. I installed a much bigger bilge pump that can push the water six feet up and out of the boat with ease. That along with the nice fresh water aboard again and we've got ourselves a semi-luxurious place on the boat to clean up.

A proper windlass fuse got installed today too. A little something to keep us from burning down the boat when the thing overheats. And also got the lazy jacks finished up. All that remains is to go up the mast to install a couple ...

END_OF_DOCUMENT_TOKEN_TO_BE_REPLACED

What if the Mayans were right? What if the world as we know it really does come to an end on December 21, 2012? If it’s true, one of the only ways you’ll be able to survive is aboard an unsinkable sailboat from Belgian boatbuilder ETAP. This according to doomsday prophet Patrick Geryl.

You remember ETAP, right? They were marketing their unique, rather innovative cruising sailboats here in the U.S. until the economy fell off a cliff in 2008. The big selling point on these boats was their double-skinned foam-filled hulls, which made it impossible for them to sink, even ...

END_OF_DOCUMENT_TOKEN_TO_BE_REPLACED

If you haven't been paying much attention to the Volvo Ocean Race, now is the time to focus. A brutal, seemingly endless, Leg 4 is coming down to an intense battle for podium places, and boats are practically match-racing as they try to get through the final 300 miles.

Groupama has sailed a brilliant leg, and barring a catastrophic breakdown, look to have this leg sewn up. Cammas and his team deserve this victory, and it will help keep Telefonica from running away with this VOR.

It is the fight for second and third, however, that is delivering ...

END_OF_DOCUMENT_TOKEN_TO_BE_REPLACED

Aw, go ahead. You know you want to watch.