puerto escondido, baja sur.
Today was one of those boat ownership days I'd rather forget about. It reminded me too much about why I hate boats. We noticed an hour or so into our motor north that the batteries weren't charging right. The voltage was sitting at 12.3, way too low. I opened up the battery compartment and got to work with the voltmeter. The voltage on the starter battery where the alternator wire comes in was 14.0, right where it should have been I think. However the house bank was still sitting at 12.3. The two banks were connected ...

END_OF_DOCUMENT_TOKEN_TO_BE_REPLACED

FUNNY THING ABOUT SAILBOAT MASTS and bridges: no matter how much clearance you actually have, when you’re standing in your cockpit looking up it always looks like you’re not going to make it. Of course, the people who think to put bridges in our way do try to provide information on how much space is under them, even at various states of the tide. But still every so often the situation is ambiguous, and you’re not quite sure your mast will fit.

Some people just hold their breath and take their chances when confronted with this dilemma. For example, check ...

END_OF_DOCUMENT_TOKEN_TO_BE_REPLACED

James Burwick is an extraordinary sailor, and very unusual Dad. So unusual, he is sailing around the world with his family (which includes his partner Somira Sao, and their two children, ages 1.5 and 3.5!), on an Open 40. Anasazi Girl just completed a late-season Souther Ocean passage, from Simons Town, South Africa, to Freemantle, Western Australia.

Here's a little teaser of what that looked like:

Now, sailing across the southern Indian Ocean, in April/May, on an Open 40, with two rugrats, might be

consdered a bit radical by the Never Expose Your Kids To Any Risk Parenting Association. ...

END_OF_DOCUMENT_TOKEN_TO_BE_REPLACED

This one will get your blood racing. If you have a pulse, and a shred of imagination, that is.

END_OF_DOCUMENT_TOKEN_TO_BE_REPLACED

Okay, the one above, famously shot off Cape Town, looks like it will be pretty bad.

But, like Charlie, I am finding the whale collisions and subsequent sailboat abandonments a bit puzzling. No one really knows how often cruising sailboats collide with whales, but it is easier to understand how a fast racing boat, or Jules Verne-attempting multihull, could come to grief than it is to understand how a slow, heavy, cruiser might.

Below is a video account of a another post-whale-collision rescue that took place earlier this month. It was shot from a Stolt tanker, that was diverted ...

END_OF_DOCUMENT_TOKEN_TO_BE_REPLACED

los gatos, baja sur.
I hate to jinx it, especially since I've no way to check a forecast from here, but the weather has been incredible this past week. Since getting away from the Coromuel around La Paz I don't think we've seen wind blow past five knots. The anchorages have been like mill ponds. It's been comfortably warm throughout the days until late afternoon when the boat finally heats up a bit too much. Nights the temperature drops quickly until we're pulling a thin blanket over ourselves. Overall it's been pretty much perfect.

Only thing worth mentioning about today ...

END_OF_DOCUMENT_TOKEN_TO_BE_REPLACED

I’VE BEEN MEANING TO SHARE more about my time in Bermuda visiting the ARC Europe fleet, but I hadn’t thought I’d end up having to write a post like this. You may have heard the news over the weekend: one of the 33 boats that departed St. Georges for the Azores last Wednesday was abandoned on Saturday after striking a submerged object believed to be a whale. Fortunately, no one was lost or injured. The boat, a Hanse 370 called Outer Limits (pictured up top slipping out Town Cut on Wednesday), belonged to an amiable Dutchman, Joost Gehrels, who I ...

END_OF_DOCUMENT_TOKEN_TO_BE_REPLACED

We've all seen videos of ships coming together in an unseamanlike manner, aka colliding, but this is the most brutal collision I've yet seen.

At least it answers the age-old question, debated since Archimedes: what happens when a 68,879 ton bulk carrier t-bones a smaller tuna boat?

Full backstory is here, but the video says it all. END_OF_DOCUMENT_TOKEN_TO_BE_REPLACED

13-May-2012 los gatos, baja sur.
We popped around the corner, just two miles, to Los Gatos this morning. Another pretty bay where we spent the day on the beach, in the water, and crawling around on the red rocks that ring the place.

Lowe has really taken to the water lately. He seems to know exactly what that dinghy ride to the beach means and once we land it he starts jostling to be let loose. And once set down he goes banzai straight into the water. He tore around so much today that by the end he was huffing ...

END_OF_DOCUMENT_TOKEN_TO_BE_REPLACED 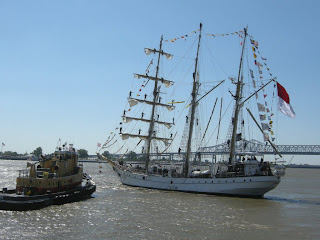 Whew, it is hard to sit down and write when there are so many things which need to be done on a tight schedule. My father is coming back into town on the 22nd and I have a lot to do to get ready. But to get my mind off boat work here’s the story of how my sister and I ended up on a late-night dance party on the KRI Dewaruci, a Barquentine tall ship owned by the Indonesian Navy.

In case you haven’t noticed we’re quickly coming up on June 18th, the bicentennial of the War of 1812...