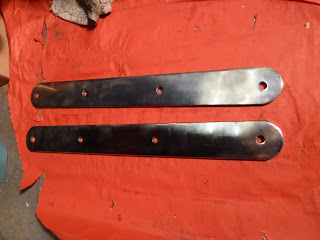 A while back I wrote up the first two thirds of how I made my own chainplates (I and II). Finally, here’s the last part- polishing.

The polishing was by far the most difficult, frustrating, and time-consuming part of building my chainplates, and not something I ever want to repeat. Unfortunately, it is necessary to do at least some polishing as a polished finish is integral to the ‘stainless’ properties of SS, but as I mentioned before I think that this step could be avoided by simply buying pre-polished stock. Certainly, polished stock would be more expensive but ...

END_OF_DOCUMENT_TOKEN_TO_BE_REPLACED

isla san francisco, baja sur.
I don't know what is going on the past couple of days, but we just can not seem to get the weather we've been expecting. We woke up to calm this morning, motored out in four knots, rounded the point into twelve knots, continued barreling headlong into twenty knots, and finally decided that was enough of that and veered off into Isla San Francisco.

Turns out I'm glad we did. It was a beautiful day, and this bay really is pretty spectacular. It's so perfect that you can't believe nature made it this way with no ...

END_OF_DOCUMENT_TOKEN_TO_BE_REPLACED

san evaristo, baja sur.
That was easily our worst anchorage to date. Rolling, rolling, rolling, all night long. Sun up, flat. We left first thing in the morning with the promise of just five knots of wind on the nose. Two hours later we were plunging headlong into twenty-five knots. Not sure what the heck happened with this latest forecast, but man. Even with all that wind the seas were never able to build much, just little two foot rollers. Enough to slow us down quite a bit, but not enough to take any water on deck.

END_OF_DOCUMENT_TOKEN_TO_BE_REPLACED

When Martin Luther King marched on Selma, “integrate” and “de-segregate” were functionally the same. ...

END_OF_DOCUMENT_TOKEN_TO_BE_REPLACED

THOUGH IT DABBLED BRIEFLY with more performance-oriented racing designs during the 1980s, the well-known Swedish builder Hallberg-Rassy has traditionally focused on creating moderately proportioned cruising boats with understated modern styling. The HR42E, so designated in honor of its designer, Olle Enderlein, predates its immediate successor, the HR42F (designed by German Frers), and was built from 1980 to 1991. It is one of the purest expressions of the Hallberg-Rassy ethos and features all of the firm’s signature design elements–a center-cockpit layout, a flush teak deck crowning a high-freeboard hull, a distinctive fixed windshield, and a well-appointed mahogany interior.

END_OF_DOCUMENT_TOKEN_TO_BE_REPLACED

san telmo, baja sur.
We got the weather this morning and it didn't sound all that great, but it didn't sound all that terrible either, and since we were getting antsy we took off. And for the next four hours we bungled along at ridiculously low speeds as the boat pounded and bobbed into short steep seas with fifteen knots of wind on the nose. It certainly wasn't bad conditions, but we did get what we deserved for leaving.

Along the way I was standing outside with Ouest in my arms. She said, "Ooh, tails." I looked behind the boat ...

END_OF_DOCUMENT_TOKEN_TO_BE_REPLACED

Agua Verde is a small village truly off the grid. Twenty-five miles of rough dirt road lead out to the main highway, dirt tracks crisscross through the village, past back yards where children bathe in buckets alongside goats and mothers doing laundry by hand. Men go off to fish in the mornings for both sustenance and a living. Somebody somewhere rounds up the goats, milks them, and produces salty cheese. The whole town seems to make the best flour tortillas available anywhere. There is no cell phone tower and thus, nobody with their eyes down and a phone pressed to ...

END_OF_DOCUMENT_TOKEN_TO_BE_REPLACED

agua verde, baja sur.
Some gusty south winds kicked in today and are going to be around through tomorrow. The anchorage population went from six to twenty because of it. There are only a handful of bays with protection from the south along this stretch of coast and this is probably the best of the bunch.

The ten foot by ten foot market here in Agua Verde got their weekly supply of fruits and veggies yesterday. This is the sort of thing that gets cruisers around here pretty excited. We went in today and scored a bag full of mangos, ...

END_OF_DOCUMENT_TOKEN_TO_BE_REPLACED

There is nothing easy about raising kids on a boat. And there are times when we wonder about our sanity. But we always tell ourselves it is the big picture we need to focus on. That boat kids are amazing, that this life, though to them is perfectly normal, is anything but normal, and that that is the whole idea. Who wants normal kids? Who wants their kids to grow up to be just like all the other kids? Not us, which is why our sanity is in question.

So despite knowing that we are doing the right thing it ...

END_OF_DOCUMENT_TOKEN_TO_BE_REPLACED

NO DOUBT YOU’RE ALL WONDERING what happened with those SAIL Magazine MOB tests I mentioned a couple of posts ago. You can skip to the end of this post if all you want is to find out what’s happening with the comic’s masthead (no, we didn’t actually lose any staff members during the tests). But I urge you to read the whole post if you want to learn something about the new SafeLink R10 personal AIS rescue beacon that was only recently approved by the FCC.

This is a game-changing piece of equipment in that it should make it ...