A couple of months back, Mia and I had a boon of sorts with the boat delivery gig. Two promising phone calls in a row had us set up to for a delivery of a Vagabond 47 from Annapolis to Albany, NY, up the Hudson river, and another on a Farr 395 from Annapolis to Maine. The Vagabond was a week or two in the making until we sorted out an arrangement with the owner. The Farr, on the other hand, was last-minute, a phone call taken in the parking lot of the farmer's market in Pennsylvania. Mia was inside shopping and I popped out into the parking lot to speak in relative peace. She got annoyed at this and came looking for me when she had to pay for the vegetables (and I had the wallet).

The conversation was on Friday. We were going to leave on Monday. They were both brokerage boats, new to the new owner, but by no means new. This was early April. We had also planned to get my parent's boat Sojourner hauled and painted and back in the water, ready to go for the summer. That Monday we drove down to Annapolis with my mom and dad, and managed to get mom onboard for the motorboat ride over to Port Annapolis marina (my mom died on April 30 after a two-year journey with brain cancer. This was her last time on Sojourner). It was my dad's 62nd birthday (April 9), and we promised him some oysters at McGarvey's. 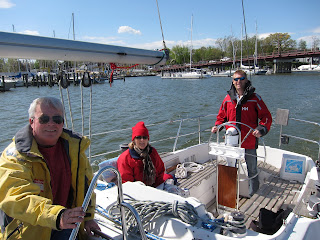 The Farr was on the dock next to the Travellift where they hauled Sojourner. We loaded a bunch of stuff into it after a friend (Dave) from Southbound drove us back to Sarles to get the car. The liferaft, a few days' worth of food, lots of cold-weather gear, safety harnesses, charts, the works. I installed the drive unit on the autopilot, hoping it might work once connected (the previous owner had the whole thing stripped out for racing) – it didn't. With only the two of us, hand-steering was going to be challenging and tiring, but not impossible. We did this and then took off to McGarvey's for dad's oysters. The original plan was to leave that night, sometime after the wind died down. There were gale warnings on the Bay and it was pretty gusty, even up Back Creek, but the forecast was for it to calm down by midnight, so we wanted to get a head start. In the bigger picture, we wanted to get that boat up to Maine, drive back to Annapolis to paint the bottom of Sojourner and then pick up the Vagabond and get right back to it, taking that boat to Albany. In hindsight, this was an impossible time schedule, but that was the plan. Mia knew this, but didn't say anything. I'm always overly optimistic so went ahead with it. 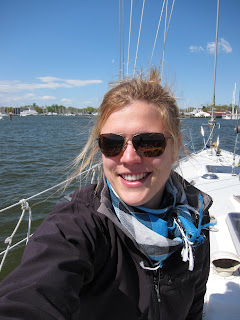 We never did get away that night. I set my alarm for midnight so we could at least get a few hours' sleep. Inevitably we ended up running back and forth to West Marine and the hardware store more times than planned, and we never finished getting the boat ready until 8pm. That alarm rang once and I immediately shut if off and went back to sleep, thinking we could leave in the morning. The sleep deprivation wasn't worth a few hours head start. It was worth it. The next day dawned bright and clear, and calm, and we got away from the marina before the yard guys showed up for the day (and before my ego could be bruised by us still being there). Mia made coffee and oatmeal and I steered us up the Bay under power. With a fair tide we made close to 8 knots over the ground and made excellent time. When we went to raise the mainsail, I discovered something else I'd overlooked. It was an old racing sail, kevlar, and was attached to the mast with lufftape, like a jib on a furler. This is very efficient for racing, but very difficult to handle when cruising shorthanded, as the sail has to be fed into the slot. Once it's down, it comes off the mast, and there are no reefs. With no autopilot, I took turns steering and hoisting the sail from the cockpit on a winch on the cabintop while Mia fed the sail into the slot. It was calm, but it was tough work, and I wondered how it was going to be offshore, especially if we needed to take it down in any wind or sea state. We motorsailed up past the Sassafras, and the wind finally picked up right before we entered the canal. I cut the engine and we hit upwards of ten knots rather easily, without a headsail. Mia came up to drop the main before we entered the canal. My plan was to go into the little marina in the canal to get more fuel, but they said on the phone there might be a seven-foot spot in the entrance channel. The boat drew 8, so that was out. 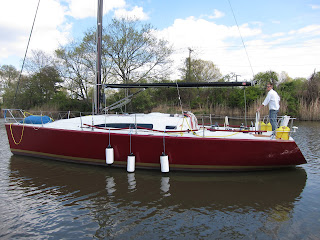 By now, the main was laying on deck, unfurled, so we put the motor in neutral and set about furling it. This worked okay, but again I wondered what we'd do in the ocean, with no autopilot and an unruly sail that slid off the mast. Plus, the thing was slippery. Then came the real problem. I put the boat back in gear, after about 30 minutes drifting (the wind and current was with us) and tidying up the deck, and when I revved up to speed, the boat vibrated so violently it felt like the rig was going to come down. This has happened to my dad before, when a folding or feather prop doesn't feather right and get's stuck, it maks such a racket that you swear something is broken. I'd earlier lost a sail tie overboard, so my initial reaction was that we maybe got the prop hung up on that. Bottom line, in forward or reverse, nothing happened except the most awful noise and vibration. So with Mia at the helm, we drifted some more. I got out all the manuals and made a bunch of phone calls. Everyone I talked to said the prop – a two-blade folding Martec – should automatically feather, that that shouldn't be the problem. 'Did you wrap it?' was the inevitable first question. I didn't think so, but that sail tie lingered in my head. So we drifted. We ended up basically drifting the entire length of the canal. Finally I decided we'd just sail – all the way to Newport, basically, as there was really nowhere else to stop. Cape May could only be entered from the ocean (the bridge in the canal was too low for the mast), and sailing up the inlet against 25 knots of wind wasn't going to work. I called SeaTow down there, and they wanted $350 per hour, and said it was pretty rough, even at the entrance. Plus, we would have gotten there in the dark. To my delight, the SeaTow guy said there was a place called Delaware City Marina right at the Delaware Bay side of the canal, and that we should try there. Mia hoisted the jib and we sailed out of the canal and into the Delaware, finally getting ahold of Charlie at the marina who said despite the fact that their towboat was still hauled out for the winter, that someone could come out to get us. A ship was coming up the channel, with two waiting tugboats to help take him into the oil depot there. Mia and I in turn sailed upwind and down again, tacking and jibing while we waited for the tow. The boat sailed beautifully, even under jib alone, so that was no problem. Charlie came out eventually in a small center console motorboat and took us into the marina on the hip. 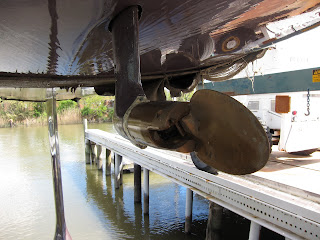 They hauled the boat the next morning – I was about to jump in the water to see if anything was on the prop, but it was freezing cold and my foot disappeared as soon as my big toe touched the water, so that seemed like a dumb idea. Turns out it didn't matter. One of the blades of the prop had actually fallen off.