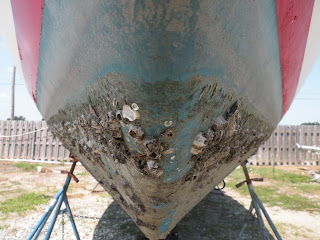 So I’m a little behind on the times but I recent heard about California Senate Bill 623 and Washington Senate Bill 5436 both regulating the use of copper in antifouling paints. The WA bill became law in May of last year and will effectively ban (less then .5% versus the 40% plus common now) copper in antifouling paints by 2020 while the CA bill is a bit less specific and is not yet law. These bills reflect growing momentum to regulate copper-based antifouling paints. Across the pond in the EU many localities have made it illegal to scrub such paint in their harbors while Sweden and the Netherlands currently ban or heavily regulate Cu antifouling and an EU-wide ban is on the table. Here’s the problem as I see it – these various laws and regulations apply only to recreational craft, the irksomely-named ‘pleasureboat’ market. The WA law goes so far as to only apply to ‘pleasureboats’ less than 65′ in length, meaning if you’re rich enough to afford a 65’+ boat you can paint it with whatever the hell you like. Of course these laws make no mention of the behemoth ships used in the commercial shipping industry. After all, a larger boat means a larger surface area and more paint, therefore decreasing the environmental impact, right? Uh, wait a sec, something doesn’t seem quite right there…

To shed a little light on the issue and try to quantify the absurdity of trying to protect the environment by regulating the smallest players in its destruction I decided to crunch some numbers. My goal was to compare antifouling use between recreational and commercial boaters. I looked at the West Coast since that seems to be the forefront of legislation, and that’s where I found numbers for commercial shipping.

First, the ‘pleasureboaters’:
According to About.com in 2006 (the only year I found info for) California had the second most registered boats in the nation with 957,463 while Washington was 18th with 260,355. Oregon wasn’t on the list but I found a Sheriff’s estimate of 190,000 here. That gives us a total of 1,407,798 registered boats on the West Coast. Now comes the biggest bit of numbers fudging- since we’ve no way of knowing how big each of these vessels are I arbitrarily assumed the average size to be the equivalent of a 31′ sailboat. Given that there are many small boats built for each prohibitively expensive larger yacht I suspect this is erring well on the large side but really it’s just a random guess!
Using numbers given by Interlux for hull paint calculations our ‘average’ 31′ sailboat has a wetted surface area of 25.08 m2. Multiplying this by our total number of registered West Coast boats gives us a total coverage of 35,307,573.8 m2. That’s over eighty-five million square meters (over 380 million square feet, or nearly two million gallons of paint) of poisonous copper-based antifouling in our West Coast waters. Personally I find these numbers pretty staggering! Of course this is assuming that my many assumptions are anywhere near accurate, which is quite an assumption in itself. But bear with me, it gets worse.

Now what about commercial shipping? Well after fruitless hours searching for and then trying to calculate the wetted surface area of supertankers my task was made immeasurably easier by a report I found from Ian Davidson, Greg Ruiz & Mark Sytsma at the Aquatic Bioinvasion Research & Policy Institute. You can read it free here. Their study was published in 2002 and deals with two years of numbers so I just divided to get figures for a single year. Here’s what they found.
In a year the commercial shipping traffic entering West Coast ports totaled 14,641 ships with a combined wetted surface area of 132,500,000 m2. That’s 3.75 times the wetted surface area of resident ‘pleasure’ boats, or nearly 7 million gallons of antifouling paint (if they’re using Interlux yacht paint. I’ve no idea of the coverage you get from commercial antifouling).

Ok, so now that we’ve got some raw numbers let me try and placate the amateur (or professional) statisticians among you who are likely to be googling my home address and preparing molotov cocktails this very moment. Aside from the many assumptions I made with my pleasureboat numbers the major problem with this comparison is that the registered boats are likely to be in West Coast harbors much longer than commercial shipping, therefore sloughing off more paint. This is somewhat mitigated by the fact that many recreational boats only spend part of the year in the water. Also my registered boats numbers includes many commercial fishing vessels among the ‘pleasureboats’ and may even include Navy and USCG vessels, all of which I would prefer to count alongside commercial shipping. Obviously this is just an exercise and I would love to hear if anyone has access to better numbers, or can think of a less flawed methodology for calculating them! Still, despite their flaws I think these numbers tell us a couple things.

First and foremost, the amount of copper being leached into our waterways is absolutely staggering. Seeing these numbers it is no surprise to me that this stuff is being increasingly regulated and I can’t say I’m opposed to the idea. Though it is worth mentioning that there is still debate on whether antifouling paint is really a culprit in decreasing water quality. I had a surprisingly hard time finding information about the effects of antifouling paint which wasn’t paid for and/or produced by copper paint manufacturers and again I would be indebted if anyone can point me to reliable independent studies.
Second it is hard to tell what percentage of copper leaching can be attributed to commercial vs recreational shipping but there is no doubt that both markets use amounts of antifouling paint that are hard to ignore. I was actually expecting these calculations to place the blame on commercial shipping at an order of magnitude (which may stiff be the case if, for example, the average size of a registered boat is 15′ rather than the 31′ I estimated) but there are a lot of recreational boats out there! Undoubtedly our scale would skew more favorably towards small-boat owners both recreational and commercial in areas of the world where the ‘average’ boatowner can’t afford hull paint costing upwards of $100/gal.

So if copper antifouling paints seem to be a real issue for water quality and legislation like that in CA and WA seeks to regulate them some might argue it is the duty of any boatowner and environmentalist to support such laws. I disagree. Like many boaters both here and abroad I find current efforts to regulate antifouling paints quite infuriating. It’s not that boaters don’t care about the environment, most of us do so dearly and in my experience boaters and particularly cruisers take far better care of our oceans than the average landlubber. The thing is, cruisers (and many boaters, though maybe not all) are a pretty straightforward lot who tend find it incredibly infuriating when legislators hoping for a ‘green’ stamp decide that they can tell the ‘pleasureboat‘ market what to do without having to tackle the often environmentally devastating commercial market.

With legislation such as these bills in CA and WA it seems that the view from outsiders is that our ‘pleasureboating’ is superfluous and so should take the brunt of all sorts of regulations while ‘essential’ commercial activities such as the transport of oil which destroys our beaches and pollutes our planet or the commercial fishing which depletes our oceans should not be subject to petty regulation. This is all the more infuriating to those who are long-range cruisers or live-aboards and for whom a ‘pleasureboat’ may be both a home and their only major possession!

Then what’s the solution? I say let’s do a little more proper independent research and if it’s as bad as people seem to think let’s go ahead and ban all copper-based antifouling. Looking at the numbers of millions of square meters of this admittedly poisonous product in our waterways it is hard to imagine that it isn’t damaging our ecosystems. But don’t just ban it for ‘pleasureboaters,’ ban it for everyone, including commercial fishing, shipping, the Coast Guard and the Navy. For the naysayers who might think such a ban isn’t possible, take note that it is happening right now with TBT-based antifouling. I’m sure that when the combined financial guns of the Navy, Coast Guard, and commercial shipping come to bear on the issue of non-toxic hull paint an appropriate substitute will be found in a short few months. And then we can start the whole cycle again in a few years when we discover how toxic that stuff turns out to be!

This article was syndicated from Safe At Harbour But Meant For The Sea: DIY Sailing with Paul Calder

Paul Calder, son of boat-systems guru and author Nigel Calder, grew up aboard a seemingly endless succession of cruising boats named Nada. Though Paul knows all about life aboard, he's still got a thing or two to learn about sailing. After a ten-year hiatus for school, Paul is now living in New Orleans, working to fix up a classic fiberglass boat on a budget so he can set off on a cruise of his own. Along the way he hopes to acquire some the sailing and maintenance skills he never quite picked up as a kid. He chronicles his adventures at his blog Safe At Harbour But Meant For Sea.