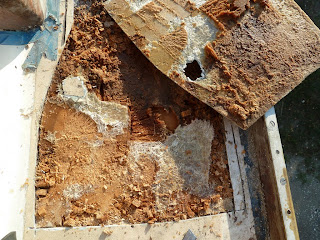 Part of the fun in my search for a boat was determining which of a vast roster of sailboat poxes and maladies should count as a plus on the scoresheet and which a minus. From hull blisters to fiberglass delamination, rot, soaked cores, decayed fasteners and decrepit systems, these boats had them all. But which were desirable features? (Hint: don’t pick hull blisters!) I could count my purchase budget on one hand in less than a hand’s worth of figures so I knew I was going to have to settle for a few ailments. Fortunately some common problems will greatly depress a boat’s value while creating a minimum of repair hassles. Deck core damage can be one of these but it can also cause much more serious problems.

Often all it takes is a poorly bedded fastener or two to rot out the wood core common to most fiberglass decks and/or delaminate the upper and layer skins, resulting in a spot where the deck feels ‘squishy’. Even when not bad enough to detect underfoot water in an airless deck core can quickly lead to corrosion of stainless steel fasteners or through-deck chainplates. Doesn’t sound good, huh? But there’s a plus side to this – squishy decks are a huge value-killer on a used sailboat seemingly regardless of where they are located. And as long as the water damage has been contained to the deck itself it is a relatively easy and cheap repair. As I recounted in this post my boat turned out to have a few more issues than we first realized, including quite a bit of water damage to the cored decks. Conveniently (for you, not me) this provides a good picture of a few common causes and effects of deck core damage. Here’s an illustrated guide to what I’ve learned on the subject. Maybe you can avoid the mistakes I made? 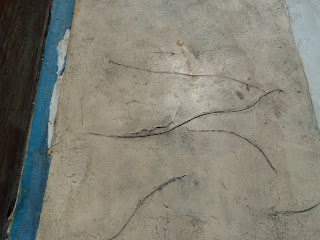 Supposedly one of the previous owners was a very large man. This is the section of deck where he would step on and off of the boat. Apparently it wasn’t up to the task!

To determine the extent of the damage we drilled core samples until we encountered dry core:
We cut the top skin off of the damaged deck area: 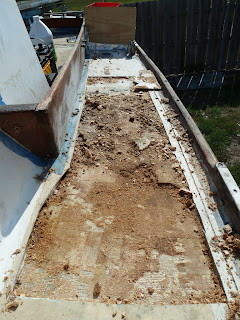 The full extent of the damage.

Looks pretty bad, huh? Actually, this is a great example of core damage which will slash the value of a boat without being a particularly serious problem. Despite the size of the damaged area (around 6’sq.) this turned out to be a relatively simple and cheap repair.

This, on the other hand, was not: 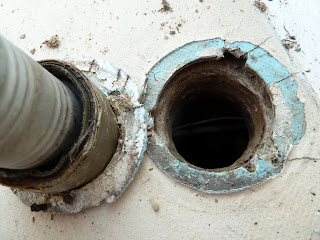 Here we see where some foolish owner tried to make up for the difference in size between
his pumpout fitting and the hole he cut for it by wrapping the fitting in duct tape!
This poorly installed fitting didn’t allow nearly as much water into the deck as in the case above but the damage it did was far more extensive. The key difference was location. In the first case the water completely destroyed an area of deck but had no other ill effects.
In this case of the pumpout fitting the deck core was not too badly damaged (we didn’t replace any of it) but the water managed to seep downhill to the outboard edge of the deck where it encountered the chainplate and pad-eye system used for the standing rigging: 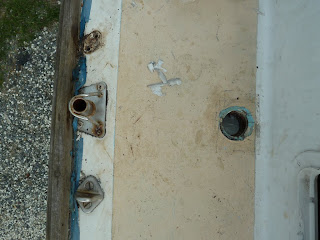 Even though the deck doesn’t feel flexy in this area enough water got through to cause the side-deck to deform under the tension from the rig: 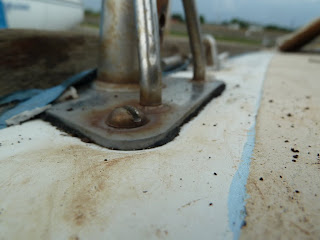 Far worse was what this water did when it dripped down the bolts which hold the pad-eyes to the chainplate: 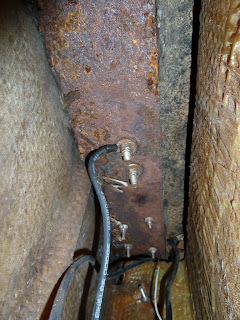 Here you’re looking at the chainplate on the
underside of the outboard edge of the deck.
Cape Dory used a rather unusual chainplate system consisting of pad-eyes through-bolted to a 3′ long steel plate which runs under the deck (The cables are there for electrical bonding purposes an unnecessary step). Water dripping down from the deck core has corrded this 3/4″ steel chainplate so much that I can literally rip it apart with my hands: 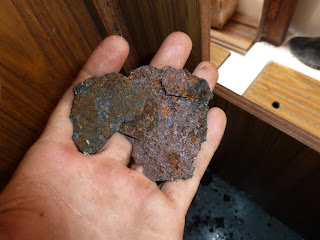 Here then is an important lesson: It is absolutely essential to properly bed all through-deck fittings and fasteners! One foolish mistake made by whoever installed that pumpout fitting (and a few similarly ill-placed mistakes) has given me the task of replacing all the chainplates on the boat, probably my single biggest task in the entire refit. It is a little infuriating, to say the least.
Along with near the chainplates another key area to look out for water damage is near the base of a deck-stepped mast. This almost always means major structural repairs are needed. Fortunately this was one bullet we managed to dodge- the base of my mast is sturdy and dry because the builders prudently eliminated the core in favor of solid laminate in this critical area.

Here is another example. 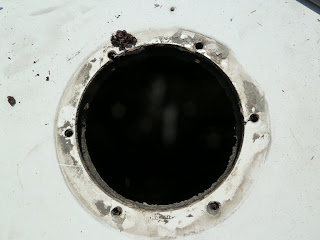 In a similar case to the pumpout fitting an engine exhaust vent was installed by cutting out the
cored deck and screwing the vent into it with almost no bedding, resulting in serious core damage. Fortunately, the core here is contained to a small area. It would seem this is only a minor issue. 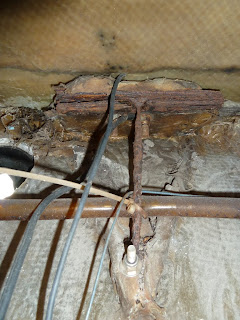 Unfortunately, this is what seeping water did to the nearby aft chainplate.
(incidentally, this is a very unusual design for a chainplate!)

So what lessons did I learn about water damage? Well I still believe that for someone willing to do some repair work a wet deck core can be a real selling point, allowing you to buy a boat otherwise out of your means. However, and this is a big one, it is imperative to determine whether the water has damaged anything in addition to the deck itself. We failed to do this and I am still paying the price in added labor and costs.

Up next I’ll walk you through how we repaired the damaged areas of the deck.

This article was syndicated from Safe At Harbour But Meant For The Sea: DIY Sailing with Paul Calder

Paul Calder, son of boat-systems guru and author Nigel Calder, grew up aboard a seemingly endless succession of cruising boats named Nada. Though Paul knows all about life aboard, he's still got a thing or two to learn about sailing. After a ten-year hiatus for school, Paul is now living in New Orleans, working to fix up a classic fiberglass boat on a budget so he can set off on a cruise of his own. Along the way he hopes to acquire some the sailing and maintenance skills he never quite picked up as a kid. He chronicles his adventures at his blog Safe At Harbour But Meant For Sea.